First of all what is weighted random ? Let’s say you have a list of items and you want to pick one of them randomly. Doing this seems easy as all that’s required is to write a little function that generates a random index referring to one of the items in the list. Sometimes plain randomness is not enough, we want random results that are biased or based on some probability. This is where a simple weighted random generation algorithm can be used.

Let’s write a quick simple implementation in JS. We need a set of random items to work with first. Let’s consider an array of programming languages.

We may not prefer each language equally, so depending upon our abstract magnitude of preference we can assign a weight to each of them –

So we have 4 numbers for each language respectively, 0.5 (50%) for javascript, 0.2 (20%) for PHP, 0.2 (20%) for ruby and 0.1 (10%) for python. These numbers we assign are the probability or the weights that’ll define the random item picked from the lang array. If you notice all the weights add up to 1 or 100% which is the highest probability. Now it may not be super necessary to have all your weights be equal to 1 or similar, but this approach just seems more legit.

In order for the languages to be picked respective percent of the time, i.e., making them conform to the weights what we’d do is something simple. Basically repeat the items 10x or even 100x times based on the numbers we have. So let’s say we’re repeating 10x times, this is the list we’ll end up with –

Hopefully you get the idea! Usually 10x is probably fine, but with more items I believe a 100x multiplier seems better, which is what I do. So let’s make a function that’d accept both the arrays and produce the resulting array.

Loop over the weights, multiply the weight by 100 and then in an inner loop duplicate the pertaining item that many times inside the weighed_list that’ll end up having a length of 100. That’s all we do, simple! Given we have lots of duplicate items, it’s more likely that the randomness will be affected as per our needs.

Next we need to write some code to generate a random number between 0 and weighed_list.length that can be used as the index to reference a biased random item.

This random number generation code has been taken from here, feel free to read it for a good amount of explanation. Now call it to get a random number to be used as index to pick an item from our weighted list.

That’s all, here’s the full piece of code –

The random item picked will definitely be affected by the weights.

Having gone through the first approach which is fairly intuitive, let’s take a look at another one which is even more easier to grasp and implement. The process for this approach is something like this –

Let’s take a look at some code now.

First of all the rand function has changed, it’s the first version from the reference now so that we get numbers with fractional parts to work with, not just integers.

Next up, in the getRandomItem method we get the total weight by simply summing up all the weights using the Array.prototype.reduce method. Inside the loop we keep on summing up the weight from the first index of weight array and check whether the random number is less than or equal to the resultant weight or not. In the steps above when I was referring to the pertaining weight slots for the random number it might have seemed something hard to implement but now as you can see it’s pretty easy. So as the loop iterates the values and conditions inside are something like this –

If any of the conditions evaluate to true the respective list item will be returned.

Wouldn't it be fun if we picked items randomly 1000 times and actually see what's the count percentage of each ? So I gave it a go using the first method described above.

Nothing too fancy, just an object with the languages as properties with numeric values that gets incremented whenever respective random item is picked. Running them a few times, these are the results we get - 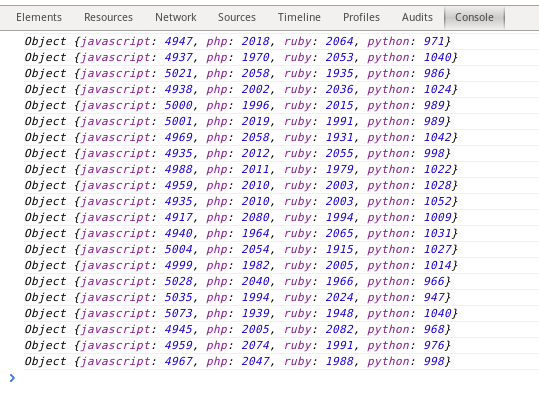 Almost near to what we want! awesome sauce! Test it yourself if you want to. Incidentally, this is the results without the algorithm -

Here's the testcase for the second method that yields similar results as the first one.

We developed these methods during our HTML5 game development process where we needed some objects to appear randomly on screen but based on some probability or weights so that we could control the randomness to make the gameplay much better and fun. Although this method can be applied to pretty much any application where you're not happy with the uniform randomness of the existing generating methods.